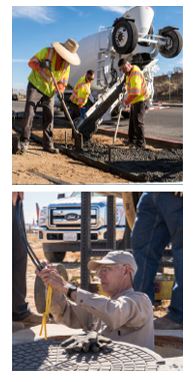 Victorville was incorporated on September 21, 1962 as a general law city.  At the time, the population was approximately 8,110, and the land area was 9.7 square miles.  Since then, our City has experienced significant growth with current population estimates of 125,000 and land mass of 74.16 square miles.

Victorville's history dates back more than 100 years prior to incorporation, when the first settlers of European descent arrived.

Early Beginnings: 1885 - 1889
In about 1885, the community was known as Victor. It was named after Jacob Nash Victor, a construction superintendent for the California Southern Railroad (Santa Fe Railroad). The town was established as a result of the original railroad station constructed approximately one mile northwest of the narrows of the Mojave River. On January 18, 1886, the Plan of the Town of Victor was prepared which created the grid pattern of the original town. This original subdivision included property between "A" Street through "G" Street and First Street through Eleventh Street. The area encompassed approximately 200 acres or one-third of a square mile.

The abundance of good water and the availability of rich bottom lands led to agricultural development shortly after the establishment of the railroad depot. Near the turn of the century, large deposits of limestone and granite were discovered. Since then the cement manufacturing industry has emerged as the single most important industry of the Victor Valley.

The New Century: 1900 - 1930
In 1901, the community's name was changed by the United States Post Office from "Victor" to "Victorville" due to the confusion associated with the community of Victor, Colorado.

In 1926, U.S. Route 66 was established, which was one of the main arteries of the National Highway System linking Chicago, Illinois, with California. A portion of this famous highway provided a transportation corridor through Victorville, which was unsurpassed until Interstate 15 was constructed. Seventh Street and "D" Street were a part of this national highway.

World War II
During World War II, on July 23, 1941, initial construction of Victorville Army Airfield, later renamed George Air Force Base, began. The base was completed May 18, 1943. When fully activated, the base supported two Tactical Fighter Wings of the Tactical Air Command whose primary aircraft was the F-4 Phantom. It also employed approximately 6,000 civilian and military personnel.

On January 5, 1989, the Secretary of Defense announced the closure of George Air Force Base under the Base Closure and Realignment Act. The base was deactivated December 15, 1992. The former military base was annexed into the City July 21, 1993, and has been renamed Southern California Logistics Airport.